The original article (in Dutch) is published in the *MO magazine here.

There is also a version of this article in Bengali (translated by Israt Kahn Mojlish). It can be found here (PDF 185 kB).

The text below is a summary of the original published article. It was presented as a talk with slides during the Women Riders World Relay Final Event on 15 February 2020 in London by Trui Hanoulle. 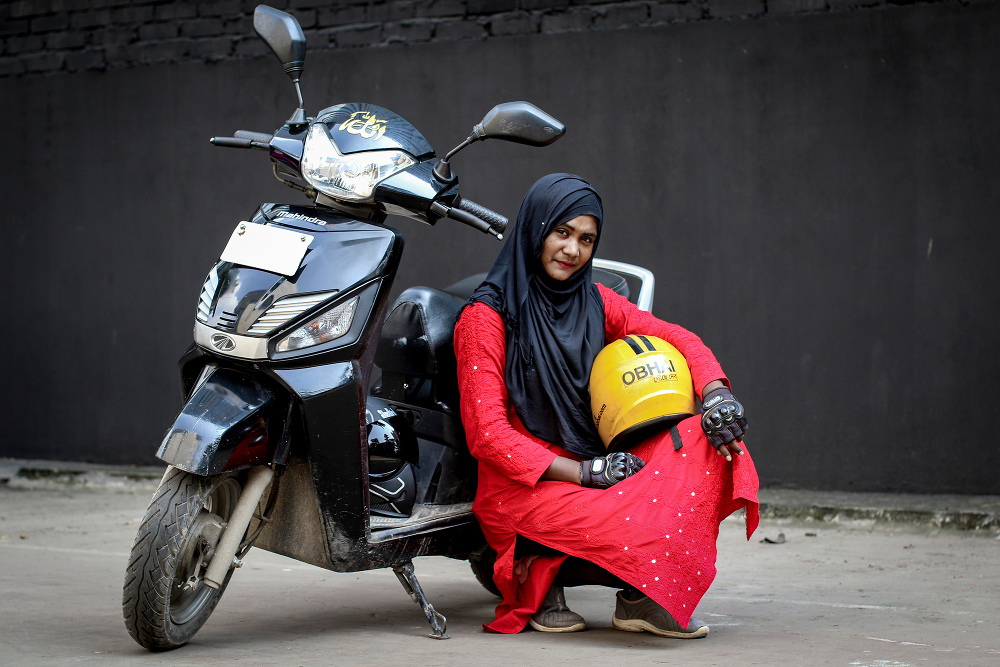 I’ve lost count of the number of kilometres I have ridden in Asia in Europe. It’s a lot ;)) over 27 years.
Outspoken a-religious, fascinated by Islamic cultures and especially rebellious women in these cultures, I’ve been following a women’s motorcycle club in Bangladesh online for years. They are called Bangladesh Women Riders Club (BWRC), and became WIMA-Bangladesh in 2016. (for those who don’t know WIMA: that’s Women’s International Motorcycle Association)Last summer, after joining the Northeast India-leg of the WRWR with Indian riders Nirmali Nath and Dimple Chaudhary, Dimple and I continued with the baton into Bangladesh. I wanted to know much more about the Bengali women riders. Yet our meeting with the women proved to be far too short. A few months later, with some new contacts, Dimple returned to Dhaka, alone, to find out more.

A Taxi Ride
4 hours sharp, she was in a taxi from the airport to a friend’s house, a distance of 17 km. She sighed, she moaned, she called 15 times to say she would be later. Cursing and honking, the taxi driver even wanted to drop her off halfway.She had to use her every skill to persuade him to continue. She had no alternative and night was falling.
Welcome to Dhaka, the capital of the country.

Eve-Teasing
With the population explosion and density, increasingly better education, a booming middle class, and ever more women working outside the homes, it’s necessary to get to jobs. But how?? Public transport in Dhaka means busses. There is no metro. Yet.

Numbers again:
80 to 90% of girls and women in Bangladesh are victims of ‘eve-teasing’, public sexual harassment or assault of women by men, often occurring on public transport.The term refers to the biblical Eve and is used in Latin America and South Asia.Used in many studies, the word is also controversial because it refers to the temptress nature of Eve, placing responsibility on the woman as a tease, again. Roma Atiqua, a 39-year-old businesswoman and founder of Jabo Bohudur, a women’s motorcycle training center, had a man grabbing her breasts on a packed bus. She was furious and slapped him, but the other (male) passengers were on his side. “You seduced him, he can’t help it.”

32 year old Jessy Tanzina Hassan, who worked in Dubai for several years, lost count of the number of times she has been scolded, mocked and molested on buses. “At times like that, I cursed myself for being a girl. I was powerless and did nothing.” After yet another incident, she looked for a drastic, different solution.

Israt Khan Mojlish, a 33-year-old software engineer and the president of WIMA-Bangladesh was not spared either.
When she started working 15 years ago, there were far fewer women working outside the home, and buses were always packed to the brim with men only. Bus drivers refused to take her as they expected too much hassle. Thus she sometimes waited 2 to 3 hours at a bus stop, in the rain or hot summer.

The Strategic Handbag
There are also motorbike taxis — by far the quickest way to get around Dhaka if you don’t have your own transport.BY AND FOR WOMEN (Obon ride-sharing) Since the rise of apps, motorbike taxis have been booming business.Obviously, most motorcycles are ridden by men. Yet for women in the Bengali society it’s not self-evident to sit behind an unknown man. So they smartly put their handbag between them and the rider to limit all physical contact. But… in Dhaka ‘holding on’ really is the only option.Moreover, by using the ride-sharing app, the mobile phone numbers become visible. More than once women get unwanted messages after the rides, not limited to ‘can I add you on Facebook?

By And For Women
A while ago on Facebook, there was a short video from the BBC about a ride-sharing motorbike taxi service by and for women in Bangladesh.

Lily Ride was the name of the small company in the video. Now Obon has joined the market. They train women to become scooter taxi riders. More than 300 women ride for them, some with their own scooter, others with a company scooter, including a GPS tracker for emergencies.In a quiet suburb of northern Dhaka lies the Obon training center. That’s where Dimple met with a group of female trainees, and with spokeswoman Feriha Kabir.It was a weekend, yet they came, many dressed up in their best sari’s. They wanted to look at their best.The girls and women have yet to complete their training but they are eager to start to work and earn their first salaries, about that of a primary school teacher.

Some of them are the sole breadwinner, for others it is an addition to the family income. Jannat Jahan and Jasmin Akter desperately need the money.
40-year-old Halima Akter doesn’t need it, but she won a scooter in a tombola and had been wanting to learn to ride a motorcycle for a long time. For her, earning money with her new passion is a win-win.
Others come from underprivileged classes; they simply cannot afford a scooter.

Obon specifically targets that group of potential employees because supply cannot keep up with demand.

Depending on talent and dedication, the training takes 1 to 3 months. The women not only learn how to ride smart and agile, but also the emergency procedures, basic motorcycle mechanics and dealing with difficult customers.

Not Without a Fight
For some women, the solution to their transport problem was obvious: they bought a motorcycle or a scooter.It’s impossible to trace who the first women was to zip through the streets of Dhaka on a motorcycle, but Rozen Mahmood stands a good chance of earning that honour.A passer-by would never suspect a die-hard motorbiker in the friendly geographer, always dressed in a smart sari, but the 51-year-old has been riding since 1996 and is the vice-president of WIMA-Bangladesh. She rides to work every day and is totally bitten by the motorcycle bug.But again, motorcycling for women was not without a struggle in the Bengali, patriarchal society. The pioneers were spat at, laughed at, had stones thrown at them, and were sometimes downright attacked, like Roma.

One day she was pestered by a big truck. When she stopped to let it pass, it crashed into her and drove off. She broke her arm and couldn’t get up. Bystanders helped her but no one could take her to a clinic. In total agony, she drove to a clinic herself. It took 3 months before she could return to work. Her mother said: “Don’t give up! You don’t GET freedom. You have to fight for it!”

“32-year-old Jessy Tanzina Hassan, who worked in Dubai for several years, sometimes lost her courage because of the constant shouting, whistling and howling. But when an acquaintance told her after a few driving lessons: “Jessy, because of you I feel like I’m flying without wings!” it gave her wings of her own.

One night after work, Israt Khan Mojlish was cornered by some men on motorcycles until she fell over with her scooter. She broke a foot; the perpetrators disappeared from the face of the earth. In total agony she only just managed to ride home, rang the doorbell and collapsed. Her husband found her unconscious on the pavement.

37-year-old IT advisor Tamanna Shilpi faced a completely different challenge:
she’s only 1m40 and it took ages to find a low enough scooter.As one of the only biking women we met in hijab, she proudly said she continued to ride seven months into her pregnancy. She simply can’t miss a day of motorcycling.

#NoMeansNo
Taunted and maltreated as they are, quite a few Bengali motorbiking women take part in actions against violence against women, against child marriages, and against the far too light convictions of rapists.
The hashtag #NoMeansNo they often use, is an anti-rape slogan invented by Canadian activists in the 1990s. In 2018 Israt Khan Mojlish, a 33-year-old software engineer and the president of WIMA-Bangladesh, contacted the organizers of ’16 Days of Activism against Gender-based Violence’. She wanted to lead the demonstration with her motorcycle club but the activists thought it was a weird proposal. “Then just walk with us! What do motorcycles have to do with our actions!?” But Israt insisted. Demonstrations with banners had been going on for years; with women bikers at the front they would stand out much more. And it worked. The press was all over them.

Emancipation Through Mobility
All of these motorbiking women are fighters, they don’t defeat.
With their helmets at the ready, fast as weasels and very articulate, they close ranks. The camaraderie of motorbikers all over the world. In 1896, American suffragette Susan B. Anthony wrote:“I think [the bicycle] has done more to emancipate women than any one thing in the world. I rejoice every time I see a woman ride by on a bike. It gives her a feeling of self-reliance and independence the moment she takes her seat.” But cycling in Dhaka is for real lunatics.
Let’s translate this quote into the other two-wheelers. Or simply into all emancipating mobility.